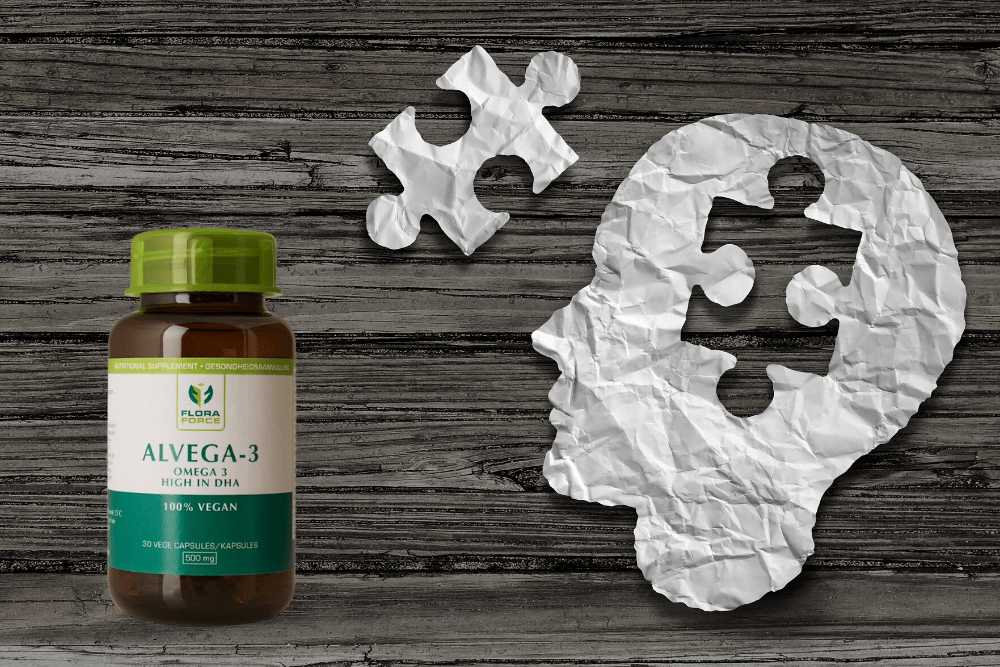 The omega-3 essential fatty acid docosahexaenoic acid, aka DHA, is one of the building blocks of every cell in your body. It’s a vital structural and functional component of your skin, eyes, and brain health at all stages of life.

For decades DHA has been accepted as an important dietary supplement during pregnancy and infancy to support brain development during the early years of life. More recently, researchers have found that DHA also provides significant brain-boosting benefits to stave off psychiatric and neurological ailments such as depression, post-traumatic stress disorder, and Alzheimer’s disease in aging adults.

DHA is the most abundant omega-3 in your brain (up to 300 times higher than other omega-3’s such as EPA) and plays a critical role in its development and function.

DHA is mainly located in cell membranes, where it makes the membranes and gaps between cells more fluid. This makes it easier for nerve cells to send and receive electrical neural impulses from the brain to every cell in the body.

Adequate levels of DHA in the body and brain allow your nerve cells to communicate more efficiently.

Many scientists and medical authorities agree that DHA is extremely important for brain tissue growth and function, especially during foetal development and infancy. DHA needs to accumulate in the central nervous system for your eyes and brain to develop normally.

DHA is mainly found in the grey matter of the brain, and the frontal lobes (responsible for information processing, memory recall and emotions) which are particularly dependent on it during development.

In humans, DHA deficiency in early life has been associated with learning disabilities, ADHD, aggressive behaviour, and several other neural and visual disorders.

Deficiency is associated with changes in brain function, including learning disabilities, alterations in gene expression, and impaired vision.

As you age, your brain goes through many natural changes, characterized by increased oxidative stress, altered energy metabolism, and DNA damage. The structure of your brain also changes, which reduces its size, weight, and fat content. Many of these changes are also typically seen when DHA levels decrease in the body.

Taking a supplement may help to avoid this, as DHA supplements have been linked to significant improvements in memory, learning, and verbal fluency in those with mild memory problems.

DHA is essential for brain and eye development. As such, low levels may disrupt normal brain function and are linked to an increased risk of memory loss, dementia, and Alzheimer’s disease.

A number of studies have shown that higher intakes of omega-3 oils rich in DHA significantly reduce the incidence of Alzheimer’s disease as well as vascular dementia, and improve quality of life and memory retention in those affected by dementia.

As Humans we readily synthesise most of the nutrients we need for body development and maintenance. But our bodies can’t do this efficiently in the case of DHA. So we have to rely on dietary sources of DHA for this essential fatty acid.

DHA is most commonly found in seafood, such as fish and shellfish in the human diet. But, fish aren’t the actual source of DHA. Just like humans can’t synthesise DHA, so too, fish can’t either. Fish absorb Omega-3’s from their diet in a bioaccumulation process. Descending the food chain, big fish depend on smaller fish, then krill, plankton and eventually phytoplankton (algae) for the true source of Omega-3’s. Yes, algae is where all the Omega-3 goodness comes from! Did that blow your mind too?

DHA also occurs in smaller amounts (compared to seafood sources) in meat and dairy from grass-fed animals, as well as omega-3-enriched or pastured eggs.

Getting enough DHA from your diet alone can be difficult, especially if you don’t enjoy seafood or if you follow a vegetarian or vegan based diet. In that case, taking a supplement may be a good idea.

But what about ocean pollution?

Just like fish and krill accumulate fatty acids from algae in the food chain, they inevitably accumulate water borne heavy metals and plastic or petroleum derived toxins in the environment too.

While many fish based Omega-3 DHA supplements claim to be purified, going to the first source is best to avoid any bioaccumulation. Schizochytrium algae used in Flora Force’s Alvega-3 capsules is a coastal marine alga renowned not to absorb toxins. That’s why it is our first choice as an Omega-3 supplement rich in DHA to maintain a healthy body and mind.

Balancing and stretching the family budget

Take a look at the latest fitness trends hitting the exercise circuit and pick one to get you ready for summer.By Taryn Dekel We...
Read More

There’s a lot more to South Africa’s heritage than boerewors and biltong, or bunny chows and bobotie. This Heritage Day, let’s celebrate some of...
Read More

This week scientists made a landmark discovery when ragweed – a highly allergenic weed native to North America – was detected in South African...
Read More

The Power of Superfoods