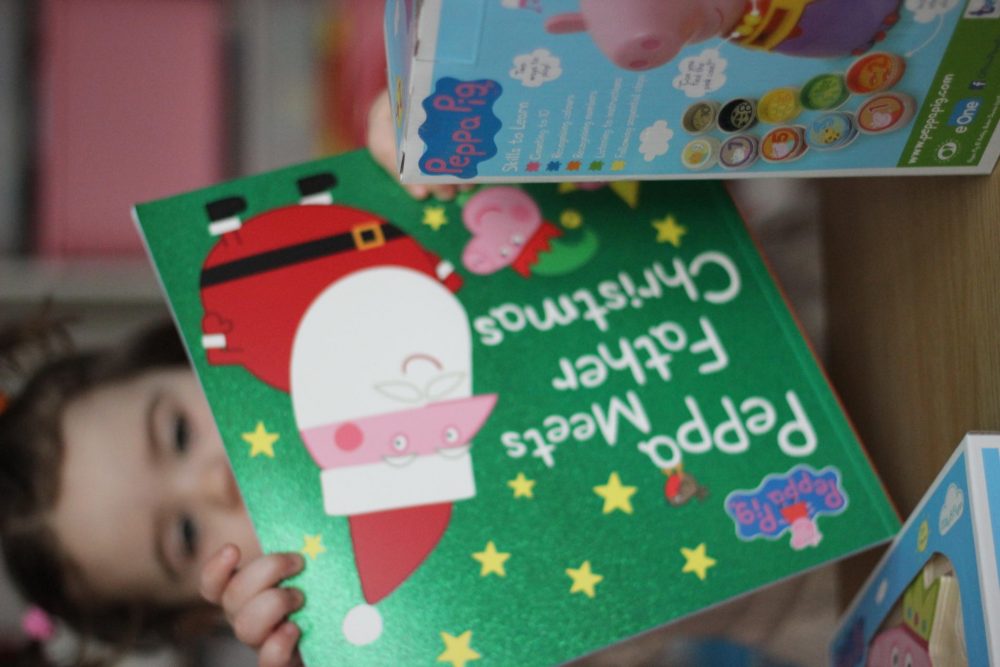 100 Things to Know about Numbers, Computers & Coding
Usborne
When was the webcam invented and why? Does imaginary numbers exist?
What is fuzzy logic?
Find the answers to these questions about the amazing world of numbers, computers and coding, along with loads of other curious, amazing and mind-boggling facts in this eyecatching book that is absolutely bursting with information.

Peppa Pig: Peppa Meets Father Christmas
Ladybird
It’s Christmas time and Peppa’s school is putting on a show. The children invite Father Christmas along to see their play, but it’s his busiest time of the year! Luckily, their very special guest makes it just in time and has an even more special surprise for Peppa and her friends. With a sparkly glitter cover, this is the perfect Peppa story to share at Christmas!
Hardcover | R150 | Penguin Random House

We asked 52 women: what does the F word mean to you? The result is extraordinary.“Brilliant, hysterical, truthful and real. These essays illuminate the path for our future female leaders.”
-Reese Witherspoon The must-read book for
2018.
Follow @feminists on Instagram for updates.

Vegan Cakes and Other Bakes
Jérôme Eckmeier and Daniela Lais
Packed with savoury and sweet ideas for vegan desserts, breads and even mains such as dairy-free pizza and eggless quiche, every recipe uses straightforward techniques and easy-to-source ingredients and has a beautiful photograph to tempt your tastebuds.
Long-term vegans with a passion for cooking, the authors Jérôme Eckmeier and Daniela Lais teach you to bake irresistibly good treats such as gooey vegan brownies, light and fluffy vegan pancakes and eggless cakes, or a smooth and creamy vegan “cheesecake”. Use their clever tips to avoid disappointing, dry, or unrisen results and follow their instructions to make your own everyday vegan substitutions for
mainstream baking ingredients such as cream cheese and buttermilk. With Jérôme and Daniela’s reassuring guidance even beginner bakers will triumph in the kitchen.
Softcover | R320| Penguin Random House

Atomic Habits
James Clear
A revolutionary system to get 1 per cent better every day. People think when you want to change your life, you need to think big. But world-renowned habits expert
James Clear has discovered another way. He knows that real change comes from the compound effect of hundreds of small decisions –doing two push-ups a day, waking up five minutes earlier, or holding a single short phone call. He calls them atomic habits. In this groundbreaking book, Clears reveals exactly how these minuscule changes can grow into such life-altering outcomes. He uncovers a handful of simple life hacks (the forgotten art of Habit Stacking, the unexpected power of the Two
Minute Rule, or the trick to entering the Goldilocks Zone) and delves into cutting edge psychology and neuroscience to explain why they matter. Along the way, he tells
inspiring stories of Olympic gold medallists, leading CEO’s, and distinguished scientists who have used the science of tiny habits to stay productive, motivated and happy. These small changes will have a revolutionary effect on your career, your relationships,and your life.
Trade paperdeck| R320 | Penguin Random House

Next Year In Havana
Chanel Cleeton
After the death of her beloved grandmother, a Cuban-American woman travels to Havana where she discovers the roots of her identity – and unearths a family secret hidden since the revolution… Havana, 1958.
The daughter of a sugar baron, nineteen-year-old Elisa Perez is part of Cuba’s high society, where she is largely sheltered from the country’s growing political unrest –until she embarks on a clandestine affair with a passionate revolutionary… Miami, 2017. Freelance writer Marisol Ferrera grew-up hearing romantic stories of Cuba from her late grandmother Elisa, who was forced to flee with her family during the revolution. Elisa’s last wish was for Marisol to scatter her ashes in the country of her birth. Arriving in Havana, Marisol comes face-to-face with the contrast of Cuba’s tropical, timeless beauty and it’s perilous political climate. When more family history comes to light and Marisol finds herself attracted to a man with secrets of his own, she’ll need the lessons of her grandmother’s past to help her understand the true meaning of courage.
Softcover | R230 |Penguin Random House

By Mariza Halliday It is never easy entrusting your child’s wellbeing in the hands of someone else. There is so much to take into...
Read More

Teach your children to have self-respect

Imagine holding a big juicy orange in your hand. The fruit feels heavy and cool and you excitedly anticipate enjoying what it has ‘inside’....
Read More

The critical link between extra mural activities and effective learning

Let’s consider what it takes to transform rough diamonds into the magnificence that we admire in beautifully polished, sought-after stones.  Taking a ‘rock’ and...
Read More

It Takes A Village To Raise A Child

By Alasdair Cunningham For as long as I remember my Dad worked shifts. The morning shifts were best as we had the afternoons to...
Read More
Absolute Mama © Designed by Driven Social