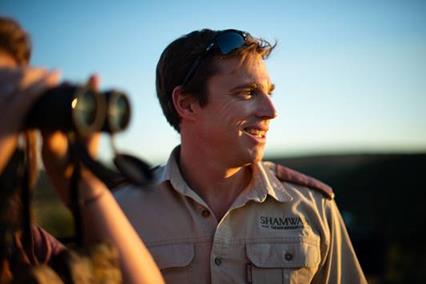 Some elephants are better at social distancing than others, prides of lions are useless, especially at mealtimes, and giraffes are fickle, moving from one group to another.

Although Shamwari Private Game Reserve is under lockdown, its animals aren’t and are going about their business as usual.

So is head ranger, Andrew Kearney. He’s still getting up early to offer game drives and guided walks, but instead of just sharing what he sees with the visitors on his Landcruiser he’s posting it on the internet for the world to see.

On his own initiative and armed with just a rifle and cellphone, Andrew has, so far, posted six videos of his daily excursions around the reserve.

Although he’s limited by the technology at his disposal and the fact that the large animals are sometimes just metres away – making loud explanations distinctly unhealthy – he still manages to cram a wealth of information and insight into each four-to-six-minute episode.

In the series so far, you can join Andrew to learn the basics of tracking, get a masterclass on giraffes, track a pride of lions to a kill, get scarily close to elephants, make a careful downwind approach on two white rhino and outrun a leopard tortoise.

If you’re missing your Easter trip to the bush, want something interesting to pass a few lockdown minutes or are looking for a fun, educational distraction for the children, visit Shamwari Private Game Reserve’s YouTube channel. Here’s a link to episode 4, the most popular so far:

Its seven lodges each provide distinct experiences: from exclusive tranquillity, effortless family enjoyment or the back-to-nature appeal of a luxury tented camp, all complemented by the very best local cuisine and thoughtful service.

By staying at Shamwari guests are participating in an immensely successful conservation project, which arrested the impact of human activity and returned to 25 000 hectares the rich biodiversity for which the region was once renowned.

Over the past 25 years the project has restored much of the ecology and attracted or re-introduced an abundance of indigenous game and birdlife, from the big five to the humble ox pecker.

The Shamwari Wildlife Rehabilitation Centre, where sick and injured wild animals are treated before being released back into the wild, is globally recognised for its pioneering work. A long-term partnership with the Born Free Foundation provides a permanent home for rescued African big cats.

10 Ways to Protect the Elderly During the Coronavirus Outbreak

The Mercedes-Benz V-Class :Large As Life

Mercedes-Benz is redefining the Multi- Purpose Vehicle (MPV) segment with the new V-Class, setting new benchmarks in its segment with its design and host...
Read More

Road Tripping in a Country of Endless Horizons