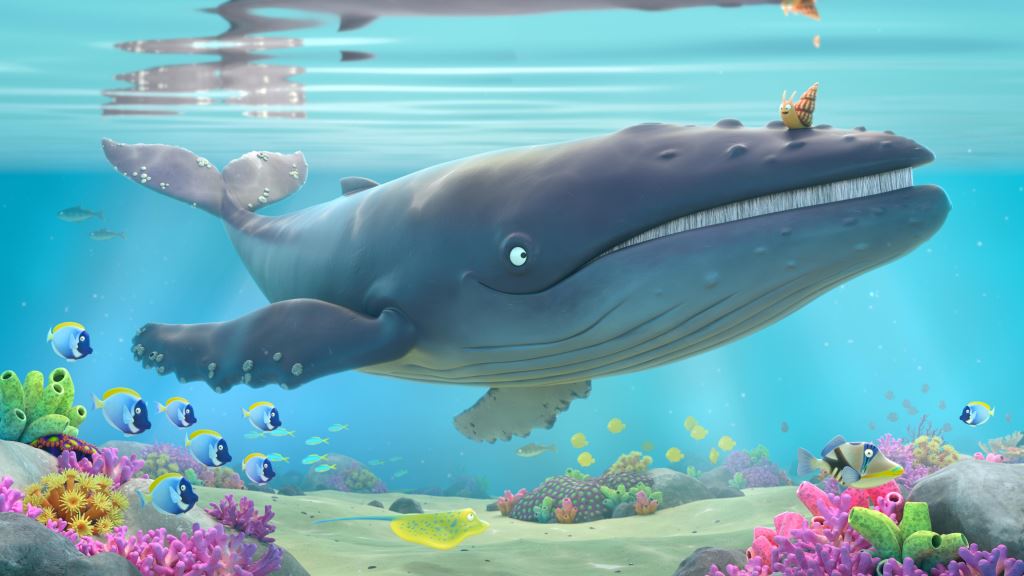 • is based on Julia Donaldson & Axel Scheffler’s bestselling picture book
• is animated in Cape Town by Triggerfish (Revolting Rhymes, Zog)
• is co-directed by South African Daniel Snaddon (Zog, Stick Man)
• is produced by Magic Light (The Gruffalo, Room on the Broom, Revolting Rhymes)
• features the voices of Dame Diana Rigg (Lady Tyrell in Game of Thrones) & two-time Oscar nominee Sally Hawkins (The Shape of Water)
• premiered to over 7.5m people on BBC at Christmas 2019
• now streaming first on Showmax in Africa

The Snail and the Whale, the latest Julia Donaldson and Axel Scheffler adaptation is now streaming first on Showmax in Africa.

Animated in Cape Town by Triggerfish for Magic Light Pictures, The Snail and the Whale premiered on BBC One at Christmas to four-star reviews and over 7.5m viewers. RadioTimes calls the 26m animation “visually spectacular… a lovely treat to watch as a family…”

This is the story of a tiny snail with an itchy foot, who travels the world on the tail of a great big, grey-blue humpback whale. It’s a tale of shimmering ice and coral caves, of shooting stars and enormous waves, and of how the snail, so small and frail, saves the life of the humpback whale.

“Although it was first published in 2003, this story now seems more relevant than ever,” says RadioTimes, highlighting the “environmental message which kids will surely take to heart” and “a lovely friendship between two wildly different creatures.”

The Snail and the Whale is directed by two-time Oscar nominee Max Lang (The Gruffalo, Room On The Broom) and multi-award-winning South African Daniel Snaddon (Stick Man). This is their second Donaldson-Scheffler collaboration, following on from the success of Zog, which earned the keen but clumsy dragon gold stars everywhere from Shanghai International TV Festival to New York International Children’s Film Festival last year, not to mention nominations for International Emmy, Kidscreen, and Annie awards in 2020.

“For anyone who’s ever felt overwhelmed, like the world is too big for you to make a difference, The Snail and the Whale is an encouragement that even though you feel small – and may even be small – what you do still matters,” says Snaddon. “The important thing is to keep hoping and to keep trying.”

The Snail and the Whale is voiced by star British acting talent, with two-time Oscar nominee Sally Hawkins (Paddington, The Shape Of Water) as Snail, Rob Brydon (Gavin & Stacey, and every Julia Donaldson adaptation) as Whale, Cariad Lloyd (Peep Show) as Teacher and Dame Diana Rigg (Lady Tyrell in Game of Thrones – and Tracy Bond, James Bond’s only wife, in On Her Majesty’s Secret Service) as the narrator.

“I Skyped in for the voice recordings,” says Snaddon. “As a kid from the Lowveld, Skype is a huge blessing because it stops you feeling too starstruck. I’m used to seeing Sally and Diana on screen, and they’re still just on a screen, so you can have a normal conversation.”

“The Snail and the Whale is a longstanding favourite in our house,” says Brydon. “It’s an epic journey across the globe, where the tiniest creature and the mightiest mammal experience the vastness of our planet together.”

“Both characters go on such a heart-warming, emotional and ultimately life-changing journey together,” says Hawkins. “It’s a very beautiful and important friendship for them both.”

The Snail and the Whale’s environmental theme particularly resonated with her. “The protection of our oceans is everything,” she says. “I hope this animation will inspire family audiences everywhere in helping to take care of our beautiful earth and its creatures for future generations and beyond.”

Snaddon first read The Snail and the Whale to his son Frank when he was still in utero. When Frank was born, “one of the first things he got was a lot of Julia Donaldson swag – he was the first kid to get a Zog plushie, as well as lots of Stick Man and Gruffalo stuff. He’s well-kitted out with the merch.”

But for Snaddon, Donaldson is more than just a supplier of night-time stories that are always a pleasure to read. “For our family, she’s changed our lives,” he admits. “I was working in advertising before this, and I didn’t have a clear pathway to making my own films, so I’m just so grateful that we as a family have been part of spreading the magic of her stories. She’s a national treasure in Britain and I’m in awe of her and Axel and the imprint they’ve made on the British psyche.”

The Snail and the Whale is the fifth in a string of BBC Christmas adaptations from Magic Light and Triggerfish, following the multi-award-winning Donaldson-Scheffler adaptations Stick Man (2015), The Highway Rat (2017) and Zog (2019), as well as the Oscar-nominated Roald Dahl adaptation Revolting Rhymes (2016).

Before teaming up with Triggerfish, Magic Light also made three previous Donaldson-Scheffler adaptations: the Oscar-nominated The Gruffalo (2009), the BAFTA and Emmy winner Room On The Broom (2012), and Annecy winner The Gruffalo’s Child (2011), among other hits.

All eight family classics are now streaming on Showmax.

Watch the trailer for The Snail and the Whale:

Watch The Snail and the Whale first and only on Showmax in Africa:
https://www.showmax.com/eng/movie/4lz7kyvd-the-snail-and-the-whale.

Money Matters Before Tying the Knot

Disney’s Moana takes the ice for the first time in South Africa with new ice-skating extravaganza. Grab your Mickey Mouse ears and get ready...
Read More

What are esports and are they safe for our teens?

For children with sensitive skin and eczema-prone skin, bath time can be troublesome. But bubble baths don’t have to be avoided with Childs Farm’s...
Read More

Barbie – the most diverse doll in the market – announces new and inclusive looks within the Barbie Fashionistas line. The line includes a...
Read More
Absolute Mama © Designed by Driven Social